How did GoT become big in Asia? And what effect has it had on the overall success of the franchise? Let’s take a look!

You would probably wonder what does an article about Game of Thrones do in the blog of 1-StopAsia. Well, our international offices work all-around-the-clock and we couldn’t help communicating all the time. We discovered that one of the many things besides work we have in common is the Game of Thrones fever. This drove us to dig deeper into the story and see its effect all over the world. Curious to know what we found out?

The show was popular from the beginning in Asia but in some countries like China, the popularity was hard to measure due to piracy. The fact is that a lot of the viewers were watching pirated copies due to censorship on national broadcasting channels. Originally it was aired in China in 2012 with the name 权力的游戏 (Quánlì de yóuxì, literally the Game of Power).

The real breakthrough in Asia, however, was when Season 7 started. According to Forbes, the increase was significant: 50% in Singapore, 47% in the Philippines and 24% in Taiwan. The reason behind this in a single word?

Localization took place on a few levels including the Marketing campaigns, Translation/Subtitling/Dubbing and co-ordinated broadcasting all over the world including Asia.

Marketing materials, articles and all that can be found in Chinese, Thai or other Asian languages. 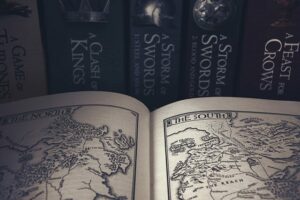 The show was dubbed into a few local languages, which made it much more understandable and easy to comprehend by a large number of viewers in Asia.

Dubbing and subtitling were an excellent choice for HBO to work on, as the languages spoken in Asia are diverse. We all know how many people live in Asia and having access to them in their language, really paid off for the producers of the show. The show has a 9.3/10 rating in Douban, the equivalent of IMBD for Asia.

And to create an even louder buzz for the show, HBO took an extra step in their advertising and marketing by sending stars from the show to Asia. You can only imagine the effect it had on the fans and potential fans of the show as they were able to meet and take photos with a few of the actors, whom they before could only idolize and admire from their side of the world through their TV screen.

This goes to show the power of talking the same language as your audience and the effect it can have on a culture. Having the show translated and dubbed into Asian languages was one of the best decisions HBO ever made for increasing and expanding their viewership worldwide.

The above is an example of how opportunities grow when you use the language for expanding businesses and brands to newer regions and territories. There’s no doubt that it could be risky, but the payoff could be enormous. The proof is visible everywhere: Netflix are using subtitling for their production and broadcasts are becoming more and more visible to various audiences. HBO has a department HBO Asia, that works for the Asian part of the world. Korean TV-Series are becoming more and more popular in Europe. That one product or service, whatever it may be, could literally take your company and brand to a higher level.