The world of games is vastly spiraling away with great demand for it. From teenagers who like to unload from the stresses of school to adults who would like to unwind, video games are fast becoming a method of release and tension relief for millions of people across the globe. While it’s true that a great game can have this effect, a poorly translated game can have quite the opposite effect, turning players off and decreasing their enjoyment of the game. As a result, translation of games without localization and desktop publishing (DTP) is impossible, especially for Asian languages. In this post, we’ve prepared seven of the most common mistakes made in-game localization with a focus on Asian languages.

A game translator needs to employ brevity when it comes to translating games. This is because it’s the very nature of games to have limited space for text. In addition, when it comes to text that’s designed for voice artists, the text should be translated as concisely as possible. Otherwise, it risks overflowing into other characters’ speeches and this will affect the overall output of the game. Employing conciseness, therefore, is crucial even if it means that the translation is not literally word-for-word, as this should actually, in practice, not take place in translations in any case.

Providing your game translator with sufficient context is also critical to ensure that the game is translated as accurately as possible without frustrating its users. Context refers to the background information about the game: who are the main characters? What is the plot? How is the game supposed to be played? What additional information is necessary to convey a more precise translation of the finished product? These questions are critical to giving the game translator sufficient details so that they can embark on the translation journey. 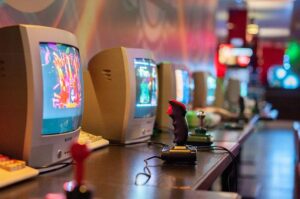 It’s true that sometimes literal translations do more harm than good. This is why creativity in the space of game localization is crucial. One needs to be able to substitute words for other similar words instead of their literal translation, as in some cases, the literal translation can sound awkward and unnatural. Use creative word substitutions to ensure a smoother, melodic-sounding tone or a harsher, more forceful tone. It’s going to be a play with words, and this level of creativity will be required.

It sometimes happens that unquotable quotes are actually quoted and this dilutes the quality of the game. This is why it’s essential to see which quotes are fitting in the context and which quotes aren’t. Always listen or re-read the text to see if it sounds natural. This should always be your ultimate goal.
Swearing and slang
Swearing and slang are often used to convey a strong feeling. But this is another area where translating literally can cost you your translator’s reputation. It’s not only about replacing one swear word or slang expression with the same literal word. It’s about taking into account local cultures and customs too. In some countries, swearing is forbidden, while in others, it’s advisable to use locally accepted swear words as opposed to using a direct translation which in some cases, can even come across as meaningless.

Intonation refers to the manner and style of expressing a language. In Western countries, for example, the use of the word “please” is commonplace and even desired to convey a polite tone. However, in Asian countries, the use of this word could seem superfluous and unnatural and hence, this type of intonation should be avoided.
Style and language biases
Conveying a respectful and polite tone towards players – whether they be adults or children – is critical for the ultimate user experience. Not using polite forms can teach children to be rude or lack the importance of politeness, while adults might feel offended when their character or the game instructions speak to them in a manner that’s considered rude.

Ultimately, the gaming experience can be extremely rewarding for players, that is, if the translation is done correctly. This will mean localizing at every step of the way. Accurate localization and not just literal translations are a great way of taking your game to new markets. Asia is a wonderful marketplace to start out with but you should ensure that you do not offend your players who are ultimately your customers. This is why you need to steer away from literal translations of words and make sure to adapt the language to the Asian context which the game is aimed for.